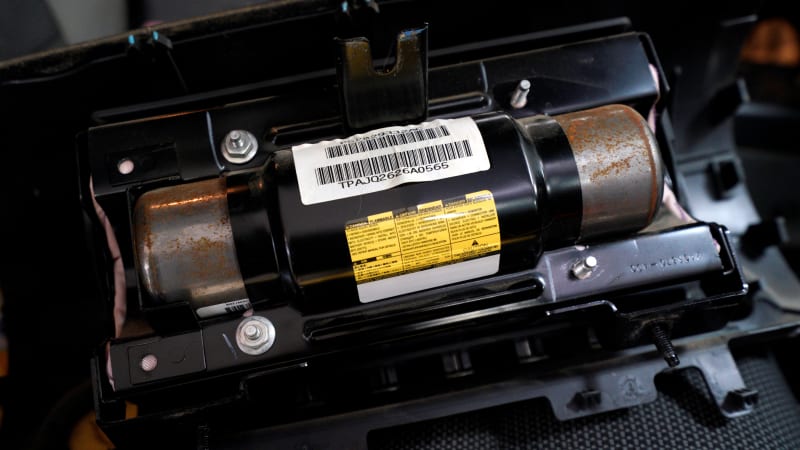 The massive blast that pummeled Beirut this week was created by 5.5 million pounds of ammonium nitrate, a highly explosive chemical that had been stored at the city’s port. But a former advisor to Takata, the bankrupt airbag supplier at the heart of the largest consumer recall in U.S. history, says there are still millions of vehicles on the roads equipped with the company’s defective airbag inflators. They, too, use ammonium nitrate as a propellant and are at risk of potentially deadly explosions.

“We’ve got probably a million or so pounds of it in people’s cars all over the county,” said Jerry Cox, an attorney who previously worked for Takata and the author of the book “Killer Airbags: The Deadly Secret Automakers Don’t Want You to Know.”

His calculation is based on figures from the National Highway Traffic Safety Administration that show that 12 million vehicles that have been recalled over the defective airbags have yet to be fixed. “What that chart doesn’t tell you is that there are 30 million cars out there that have them but have never been recalled,” he added.

NHTSA says roughly 63 million Takata airbags involving 19 automakers have been recalled since 2013 in the largest string of automotive recalls in U.S. history. The airbag inflators are prone to exploding, especially in hot and humid conditions, and spraying metal shrapnel into vehicle cabins. They’re officially responsible for 16 deaths and at least 250 injuries in the U.S. alone., and 25 deaths worldwide.

As of December 2019, there were more than 41 million vehicles under recall for roughly 56 million defective Takata airbag inflators. Years before, Takata began making new inflators that added a desiccant, which it said would keep the ammonium nitrate solution dry and make it less prone to breaking down into a state that could cause a dangerous explosion when activated. The Obama administration in 2015 gave Takata an ultimatum: Prove the new inflators are safe by the end of 2019, or NHTSA would recall another 30 million vehicles equipped with them.

In May, NHTSA finally weighed in, saying the airbags were safe and did not merit a recall of the vehicles equipped with them. Cox, who was hired by Takata’s U.S. arm in 2014 to help devise a strategy for how to respond to the mounting crisis, said he reviewed a copy of the engineering report NHTSA relied on for its decision.

“This was all done in secret without any participation by independent engineers,” he said, adding that government regulators didn’t ask Takata engineers whether they believed the new desiccated inflators were safe. “To a man, those engineers, if you contacted them, would say these inflators are no safer than before” and will eventually degrade and pose an explosion risk.

Takata originally developed the ammonium nitrate inflators as a way for OEM customers to save costs — Cox said the chemical was one-tenth the price of guanidine nitrate, the propellant used by airbag competitors — despite reservations from many of its own engineers. Autoliv, a rival airbag manufacturer, tested Takata’s inflators and found they were unsafe and could turn the metal canister housings into shrapnel.

In 2017, Takata agreed to plead guilty to wire fraud and pay $1 billion in criminal penalties. The company filed for bankruptcy later that year. A Chinese-owned company called Key Safety Systems purchased the remnants of Takata in 2018 for $1.6 billion and renamed the company as Joyson Safety Systems, based in Michigan.

Cox is critical of the response by the government and many of the 19 automakers that have used the faulty airbags and have been forced to issue recalls. He said many used car dealers remain “more than happy” to sell vehicles equipped with the ammonium nitrate inflators.

“This is a do-it-yourself project,” Cox said of getting replacement inflators. “As you put your finger in it, people need to take care of this themselves. The government is not going to help them.”

Carvana’s dealer license suspended in Illinois, for now
15 hours ago

SwitchArcade Round-Up: Reviews Featuring ‘Dungeons of Dreadrock’, Plus the Latest Releases and Sales
15 hours ago
We use cookies for various purposes including analytics and personalized marketing. By continuing to use the service, you agree to our use of cookies.