Dr. Adrian Lund credits his 2020 BMW 540i with saving his life. You could also say he saved his own life.

There are undoubtedly thousands of people alive and walking around today who otherwise wouldn’t be, thanks to Lund. Over his 36-year career, the now-retired president of the Insurance Institute for Highway Safety was instrumental in changing laws, behaviors and vehicle technology in ways that made the cars we drive, and the roads we drive them on, far safer. Last week, he told the tale of experiencing this firsthand when he survived a high-speed crash and rollover.

Lund had departed for Savannah, Ga., and was 15 miles from his northern Virginia home last August when another motorist inexplicably made a U-turn on I-95 and started driving against traffic. Lund estimates he was traveling 60 to 65 mph and the other car was doing about 50 when they collided. It was an overlap crash — meaning they met driver-side to driver-side, the type of accident that the IIHS began testing for years ago.

“This was a high-speed crash, one that probably 10 years ago, I wouldn’t be here to talk to you about it,” Lund said.

The crash sent his BMW spinning, and then into a rollover.

Lund’s 540i was a 2020 IIHS Top Safety Pick, and earned “good” ratings in all crash tests — including the small overlap and roof-strength tests. 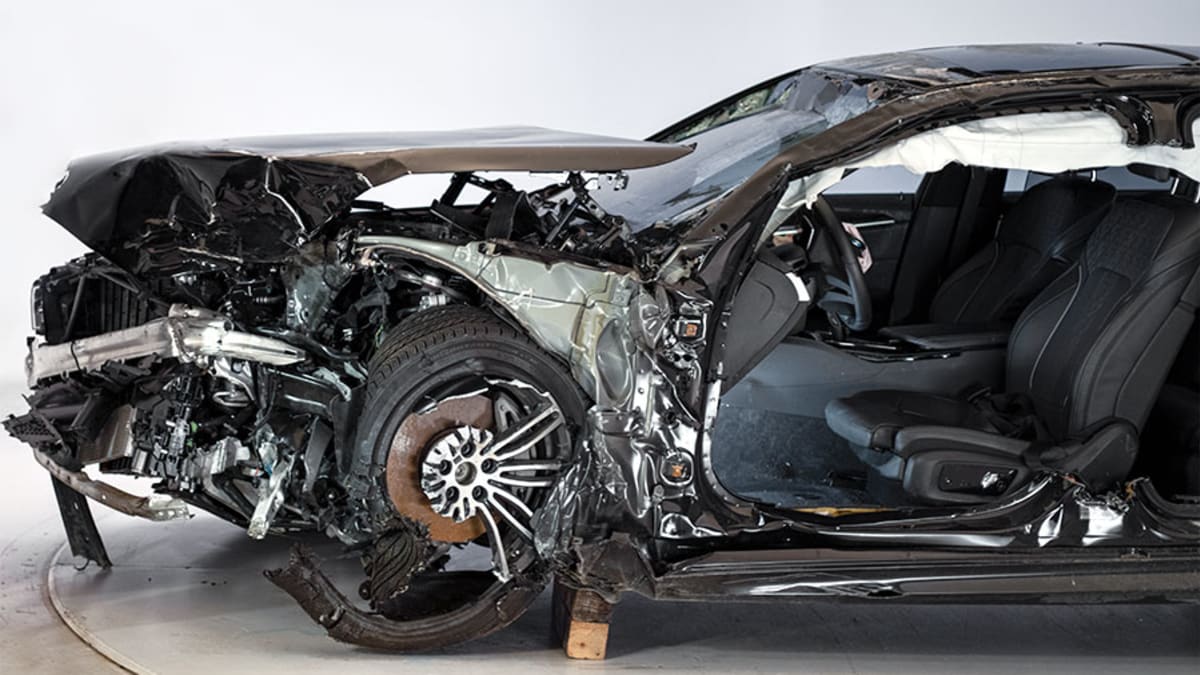 Lund was left hanging in his seatbelt in the overturned car until rescuers arrived to extract him, but as he lay there he noted that there was plenty of space remaining in the driver’s footwell for his legs and feet, an area that can see intrusion in an overlap crash. “It did occur to me that yeah, this is what we were after. There’s room here.”

He wasn’t without injuries. He came away with cuts and bruises, a likely concussion, and neck soreness that lasted for months. But he survived.

The woman driving the other car, however, did not. She was also driving a BMW, a 2016 228i, and that model had also performed well in IIHS crash testing. However, she was not wearing her seatbelt. She was ejected from the vehicle and died at the scene. Had she been belted, she might still have been seriously injured or killed, as the smaller car hit a Jersey barrier.

“In the end, it’s all about one thing — providing vehicle occupants with the best possible protection in the event of an actual crash,” Schuster said. “IIHS has also been pursuing the same goal for decades. By setting requirements and performing tests derived from real-world crashes, they have been instrumental in driving vehicle safety. Ultimately, the crash Adrian Lund had with his BMW 540i is a powerful example of how the interaction between consumer protection organizations like IIHS and automakers saves lives on the road.”

Lund cites luck in his walkoff quote. But he also benefited from years of science — he made his own luck:

“In a crash like this, you don’t come out uninjured,” Lund said. “Considering the crash I was in, that I had a frontal, followed by a rollover — yeah, I’m pretty lucky. The car did its job.”

Trophies Are Coming To Classic PlayStation Games
11 hours ago

This massive vessel generates electricity from ocean currents
12 hours ago

Dragon City: 4 Reasons to Join In with the Social Strategy Epic’s 10 Year Anniversary Celebrations
12 hours ago

M4 CSL Is The Fastest Ever BMW At The Nurburgring With 7:20 Lap
13 hours ago

Trophies Are Coming To Classic PlayStation Games
11 hours ago

This massive vessel generates electricity from ocean currents
12 hours ago

Dragon City: 4 Reasons to Join In with the Social Strategy Epic’s 10 Year Anniversary Celebrations
12 hours ago

M4 CSL Is The Fastest Ever BMW At The Nurburgring With 7:20 Lap
13 hours ago

Walk around of the BMW M4 CSL – Video and Photos
13 hours ago
We use cookies for various purposes including analytics and personalized marketing. By continuing to use the service, you agree to our use of cookies.