Volkswagen’s emblematic rear-engined Bus is turning 70 this year. It’s one of the best-known and most versatile vehicles ever built. It ended up in the hands of hippies in the United States, power companies in Germany, delivery drivers in Brazil (where it was made until 2013), and millions of families who simply needed a spacious, affordable form of transportation. It went electric before it was cool, and it’s still sought-after in 2020; your author owned one (and currently drives a Beetle), and Consumer Editor Jeremy Korzeniewski keeps a 1975 camper.

And yet, the Bus we know and love might not have existed if Volkswagen hadn’t built a little-known vehicle named Plattenwagen in 1946 to move parts around its factory in Wolfsburg, Germany. It’s the very definition of function-over-form design, it’s little more than a motorized platform, and it was designed in the face of adversity.

No forklift? No problem 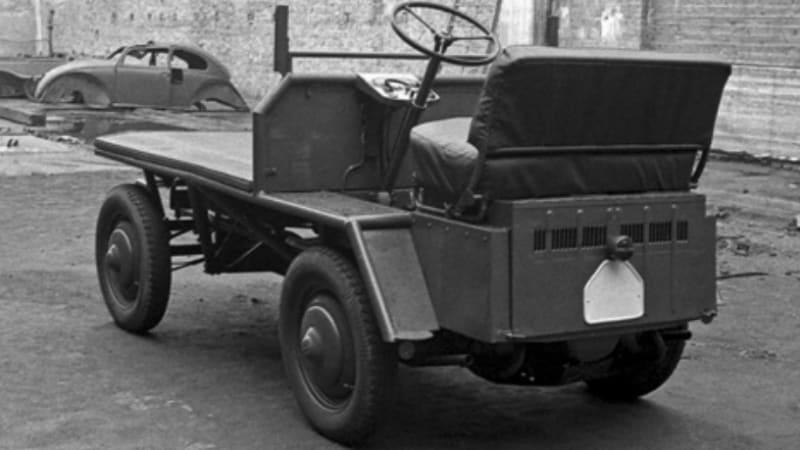 England’s military took over control of Wolfsburg (and, consequently, of the Volkswagen plant) from its American counterpart in June 1945. Officials quickly realized the people living in and around the city needed jobs, so they rebuilt the bombed factory and launched civilian production of the Beetle (known internally as the Type 1) in December 1945. Working conditions were extremely difficult due in part to material and equipment shortages.

“I borrowed some gasoline-powered forklifts from the British Army. Suddenly, officials said ‘we want those back,’ and [plant manager] Rudolf Brörmann again exploded, saying ‘that’s the end of production!’ I said ‘don’t be stupid, we’re a car factory, surely we can do something.’ I took a Kübelwagen or a Käfer chassis, put a flat board over one end of it, put the driver’s seat over the engine, added a steering wheel, and that became the Plattenwagen,” explained Major Ivan Hirst, the British Army officer who managed Volkswagen’s post-war recovery.

It really was that simple; the Beetle’s basic platform was extremely modular well before the term entered the automotive industry’s lexicon. Anyone familiar with the car’s anatomy will immediately recognize parts like the wheels, the turn signal stalk, the steering wheel, the speedometer, the windshield wiper motor, and, of course, the air-cooled flat-four engine. Made in 1973, the example shown above in our gallery is powered by a 1.6-liter four-cylinder engine that develops 50 horsepower. It has a top speed of approximately 30 mph, which was plenty.

Volkswagen told Autoblog it doesn’t know precisely how many examples of the Plattenwagen were built, though production lasted between 1946 and 1973. Some remained in service for decades after the last one was built. Looking through photos in the company’s archives department confirms there were many variants of this Beetle-based trucklet, including a few with a closed cab (they were presumably driven outside) and some open ones. They shuttled parts through Volkswagen’s factory, and the one in our gallery was also used as a tea dispenser. 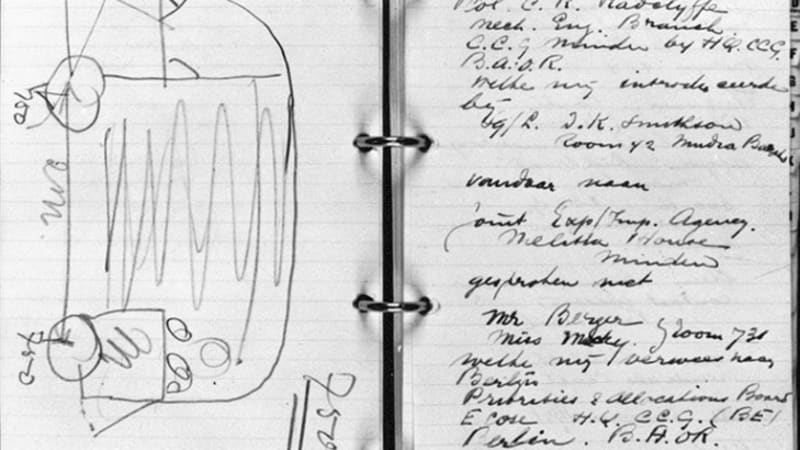 Hirst never planned to make the Plattenwagen available to the general public; it was designed strictly for internal use, and it was not homologated for public roads. And yet, demand for versatile commercial vehicles was immense in post-war Europe. Ben Pon, the man who became Volkswagen’s official Dutch importer in 1947 and shipped the first Beetle to the United States two years later, tried convincing Hirst that there was a big market for a simple, reliable, and cheap commercial vehicle like the Plattenwagen. He had seen it in action while visiting Wolfsburg in 1946 to purchase a batch of Beetles. It was a little crude, sure, but it was on the right track.

In April 1947, Pon sketched the outline of a boxy van (shown above) he envisioned built on the Beetle’s platform. It was a more sophisticated version of the Plattenwagen that was better aligned with the public’s needs. Volkswagen had its hands full with Beetle production that year, it lacked the time and the personnel to develop a van, but it didn’t consign Pon’s idea to the attic. Development work started a few short years later, and production of the Bus — known internally as the Type 2 — began in March 1950. All told, the final product looked a lot like the van depicted in Pon’s drawing, though it wasn’t built on a Beetle platform for packaging reasons.

Flipkart Electronic Sale 2022: Discount Offers on Budget Smartphones
13 hours ago
We use cookies for various purposes including analytics and personalized marketing. By continuing to use the service, you agree to our use of cookies.