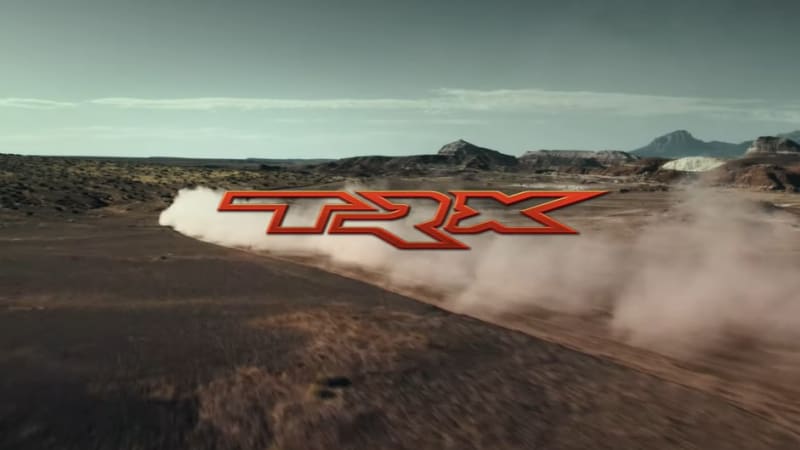 Ram turned every head at the 2016 edition of the Texas State Fair when it introduced a 1500-based, Hellcat-powered concept named Rebel TRX. Nearly four years later, it’s finally ready to unveil the production version of its burly truck, which will seemingly lose the Rebel designation while keeping the supercharged V8.

Aimed directly at the Ford F-150 Raptor, the 1500 TRX — an acronym which stands for Tyrannosaurus Rex; get it? — will arrive as a high-performance truck that feels right at home speeding through the desert. Although the preview video released by Ram hides the truck’s overall design, it’s reasonable to assume it will receive a rugged look characterized by a model-specific front bumper that increases the approach angle, skid plates that protect the underbody, and massive tires tucked under fender flares. It will be bigger and meaner than the standard 1500.

It will sound the part, too, thanks to a version of the supercharged, 6.2-liter Hellcat V8 engine found in several Dodge and Jeep models. Although the concept made 575 horsepower, insiders (and spy videos shot on the Silver Lake Sand Dunes) hinted the production model will put over 700 horses under the driver’s right foot.

Ram will introduce the 1500 TRX online on August 17 at noon Eastern time, which is 9 a.m. in Los Angeles. It will stream the event on its various social media outlets (including its Facebook account and its YouTube channel). Sales will start in the coming months, but pricing information hasn’t been announced yet. We expect the TRX will be pegged in the same price bracket as the F-150 Raptor, which starts at $55,150 including destination.

And, while Dodge will only manufacture the Hellcat-powered Durango for six months, we’d be surprised if the 1500 TRX lands as a limited-edition model. Odds are Ram plans to fill every order it receives.