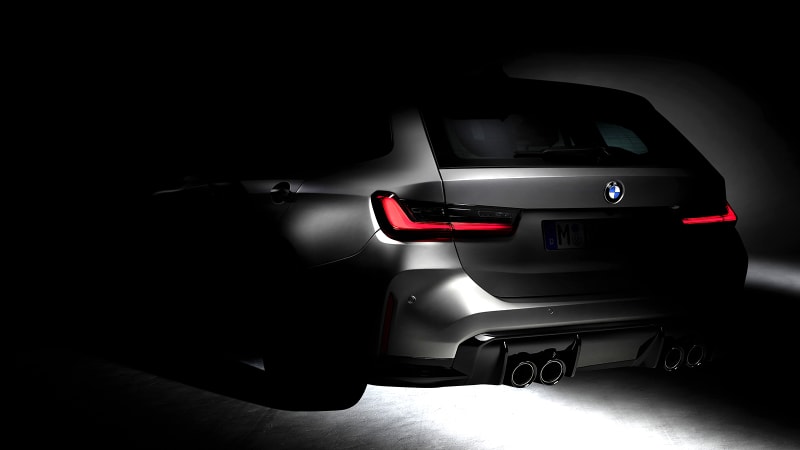 We seem to be in a station wagon renaissance. Following a new RS 6 Avant, which is actually coming to America, BMW is getting in on the hot wagon, er, bandwagon with an honest-to-goodness BMW M3 Touring. Not only is that exciting for wagon fans, but for BMW fans in general, since BMW has never made an M version of the 3 Series wagon. The closest the company came was with a prototype in 2000 of an E46 M3 wagon.

The teaser doesn’t reveal much except a carefully shaded three-quarter shot of the rear of a wagon. It does have big fat rear fenders, a chunky diffuser and four cannon-size exhaust tips.

Mechanically, it should be basically identical to the M3 sedan and M4 coupe. The base engine will be a 473-horsepower twin-turbo 3.0-liter straight-six, and the likely Competition trim will make 503 horsepower from an uprated version of the engine. The base engine on those cars can be had with either a six-speed manual transmission or eight-speed automatic and only the latter with the high-output engine. Rear-wheel drive will be available on both, and all-wheel-drive only on the Competition.

So, what are the odds of the M3 Touring coming to America? Slim to none. The wagon was discontinued for the U.S. with the latest generation, likely because buyers could simply buy an X1 or X3 for practicality. And as such an M3 Touring would be a niche of a niche. Also, since the latest 3 Series wagon hasn’t been brought here, BMW likely hasn’t had it safety tested and certified for import, so BMW would have to go through all that work for a vehicle with tiny sales. It’s a bit sad, but that’s the state of things. But instead of lamenting the M3 Touring, celebrate the fact that you can get new wagons, some of them quite fast, from Audi, Mercedes, Jaguar and Volvo.

3 months ago
Behold the first electric ‘Smart Kart’ for kids

3 months ago
Behold the first electric ‘Smart Kart’ for kids