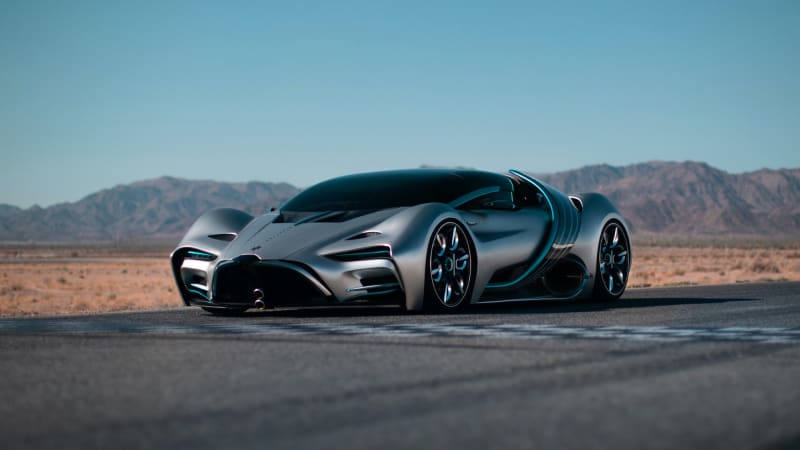 Did you hear that? It didn’t sound like much, did it? Pretty quiet. Did you feel it? Just a whiff of passing vapor? Either that’s the emissions of a fuel cell supercar, or a big entrepreneurial dream not long for this world. When you see it, though, it’s hard to miss. That’s the Hyperion XP-1, which, after a little teasing, was officially revealed in the video above.

We don’t have a lot of details yet. Hyperion says the hydrogen hypercar can travel 1,000 miles between refueling — a process that takes mere minutes — and that it’ll do 0-60 miles per hour in a blistering 2.2 seconds. Its side aero elements not only help provide high-speed cornering stability, but they house solar panels, “which can articulate to follow the trajectory of the sun.” Hyperion, which also has aerospace and energy arms in addition to its automotive business, plans to produce the XP-1 in the U.S. starting in 2022.

Sure, I was a little flippant in my lede with the vaporware insinuation. We’ve seen a lot of high-tech, green cars come and go without making much of a splash or nary a ripple in the marketplace. We’ve seen it go the other way, too, and we’re still waiting on sure signs of success from others. Hyperion CEO Angelo Kafantaris called the XP-1, in part, “an educational tool for the masses.” He added, “Aerospace engineers have long understood the advantages of hydrogen as the most abundant, lightest element in the universe and now, with this vehicle, consumers will experience its extraordinary value proposition. This is only the beginning of what can be achieved with hydrogen as an energy storage medium. The potential of this fuel is limitless and will revolutionize the energy sector.”

It’s easy (maybe even lazy) to be dismissive of hydrogen with all the gains battery electric vehicles are making, but I still believe hydrogen has a place in the green energy ecosystem, and I’m not alone. Look at Toyota, Hyundai, even a number of countries that see a big future for it in their economies. It currently has its challenges (and listen to our Green Episode of the Autoblog Podcast for more about that) but also plenty of promise, if you know how to look at it. Furthermore, Hyperion says it has a “plan to revolutionize the hydrogen refueling industry.” If that’s the case, it gives the XP-1 — and hydrogen cars in general — a better shot at success.

Anyway, check out the cool fuel cell car from Hyperion in the video and photos above, and debate about it — and about hydrogen — in the comments.

Hi there I am so excited I found your weblog, I really found you by accident, while I was researching on Google for something else, Anyways I am here now and would just like to say thanks a lot for a fantastic post and a all round thrilling blog (I also love the theme/design), I don抰 have time to browse it all at the moment but I have book-marked it and also added your RSS feeds, so when I have time I will be back to read much more, Please do keep up the awesome work.