BMW’s flagship three-row SUV is getting a significant refresh for the new model year. The 2023 BMW X7 gets new styling inside and out, and it also features revised powertrains. Most notable of which is a more powerful base six-cylinder engine.

The front of the X7 has the most obvious and potentially controversial changes. The headlights have been split into upper daytime running lights and lower forward-illuminating headlights. It’s the first BMW model to use such a setup. The upper lights echo last year’s model, and stand out with brighter trim. The headlights feature dark trim, and almost look like air intakes. That look is supported by how they blend into the air curtain scoops in the bumper. The front grille is slightly redesigned, and it’s now available with grille illumination. The rest of the SUV is fairly similar, save for taillights that have more of a sculpted design. They also have geometric patterns in the corners of the illuminated areas. BMW now also offers massive 23-inch wheels for extra flash.

Inside, the X7 is thoroughly updated. Leading the changes is the curved display that incorporates the instrument infotainment screens. It’s clearly based on the iX display, and stands proudly on the dash, in contrast to the old model’s more conventional display tucked under a plastic hood. The instrument screen measures 12.3 inches whereas the infotainment screen comes in at 14.9 inches. There are other detail changes in the design of the air vents, dash panels and the center console. The latter of which now lacks a large shift knob, opting instead for a small toggle paddle. 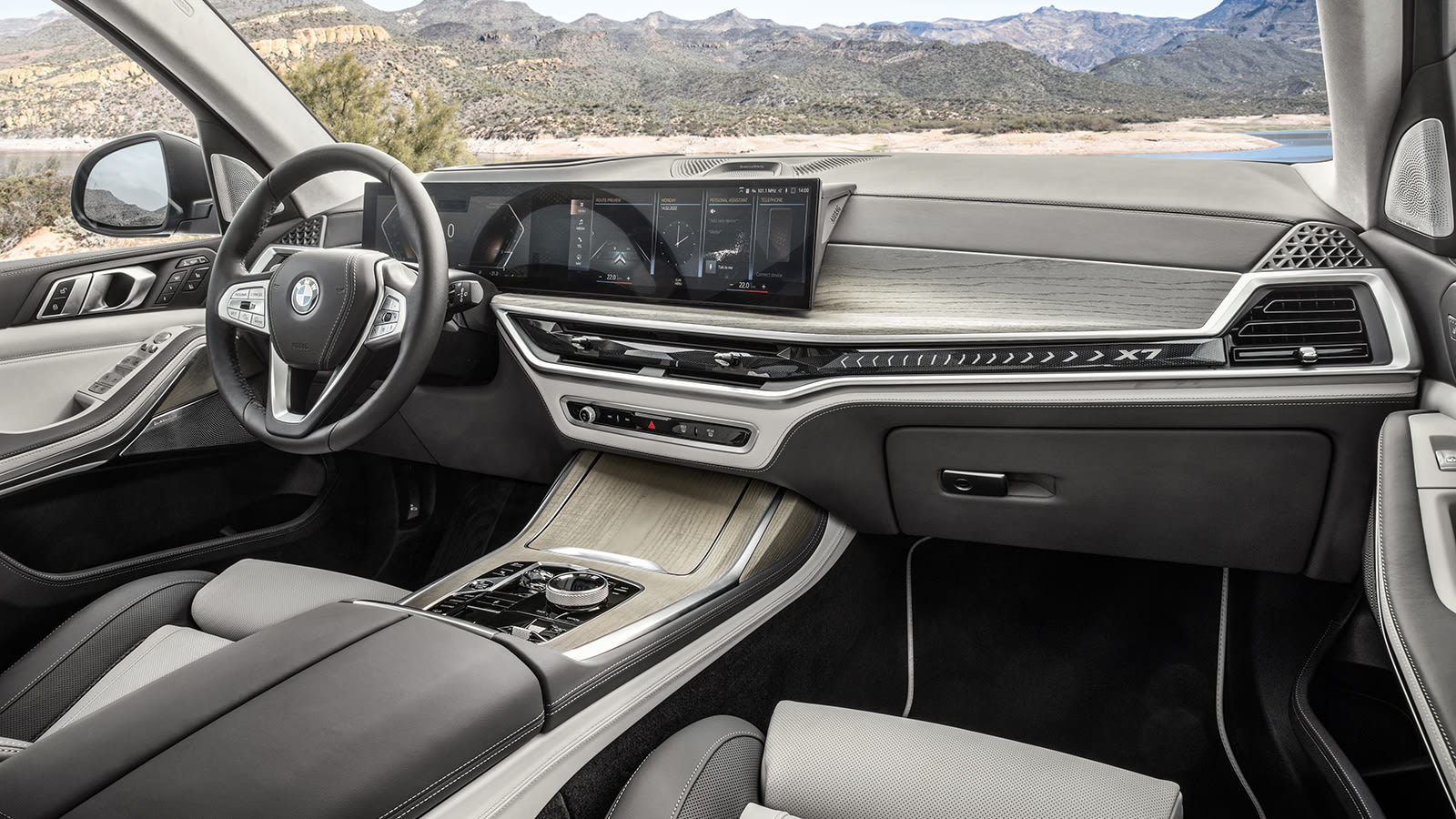 Powering the X7 are three different engines, each corresponding to a different variant. The base xDrive40i sees the biggest change. It now has a Miller-cycle turbocharged 3.0-liter inline-six with a 48-volt mild-hybrid assist system. It makes 375 horsepower and 383 pound-feet of torque, increases of 40 horsepower and 52 pound-feet. The hybrid assist can also briefly boost torque to 398 pound-feet. It gets the xDrive40i to 60 mph in 5.6 seconds.

The M60i sees the least amount of changes. It does pick up a 48-volt hybrid assist, but output for the twin-turbo 4.4-liter V8 is unchanged at 523 horsepower and 553 pound-feet of torque. The 0-60 run takes 4.5 seconds. If that’s not quick enough, the Alpina XB7 makes a return, and its version of the mild-hybrid twin-turbo V8 now makes 630 horsepower and 590 pound-feet, 18 horsepower more than before. It will make it to 60 mph in 4 seconds flat, and it has a top speed of 180 mph.

All of these X7 models come with an eight-speed automatic transmission, and it has a new feature called “Sprint.” If the driver holds the left shift paddle for more than 1 second, the transmission will automatically select the lowest available gear. It also jumps to the SUV’s sportiest settings, all of which ensures maximum acceleration when asked. 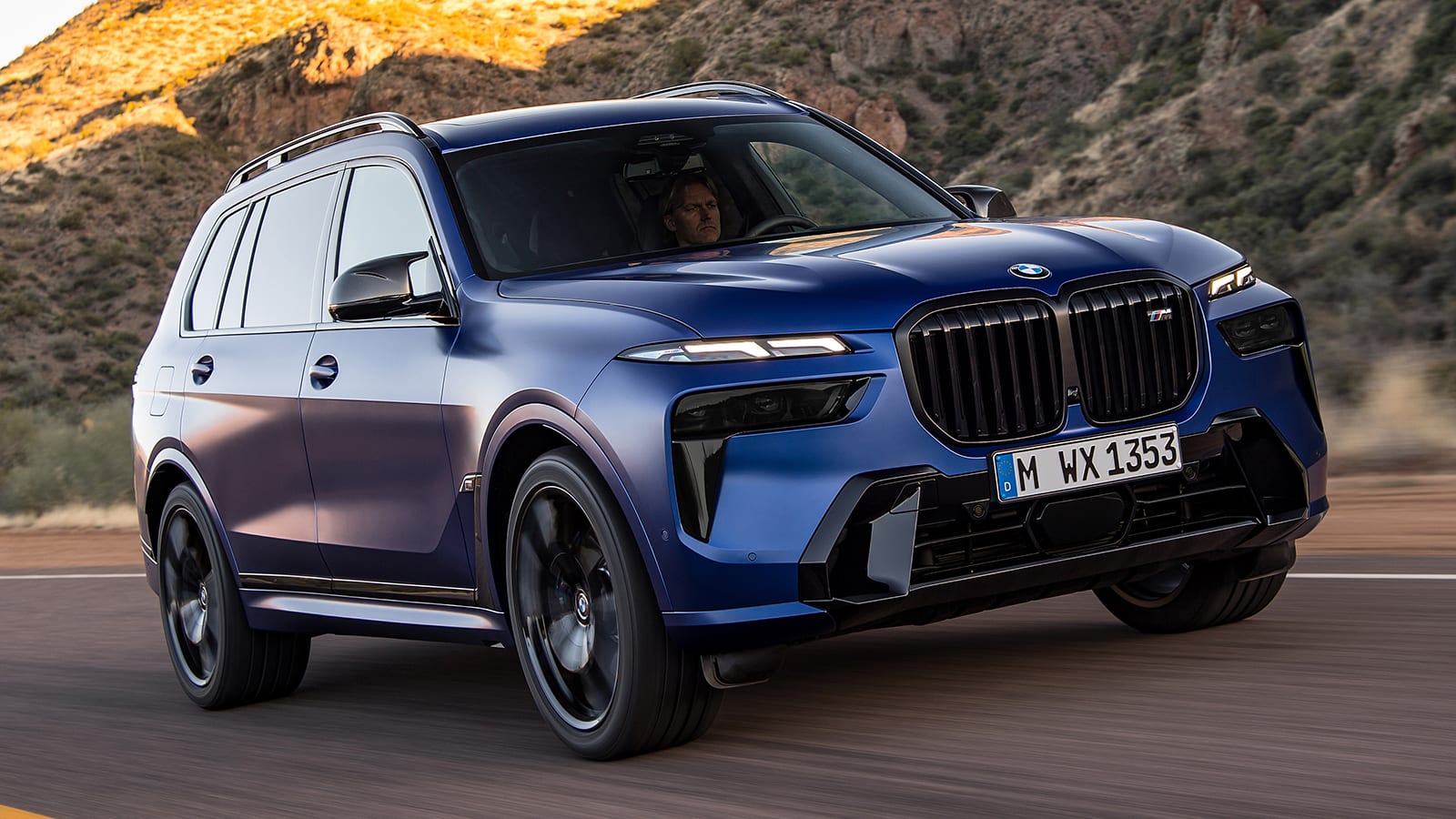 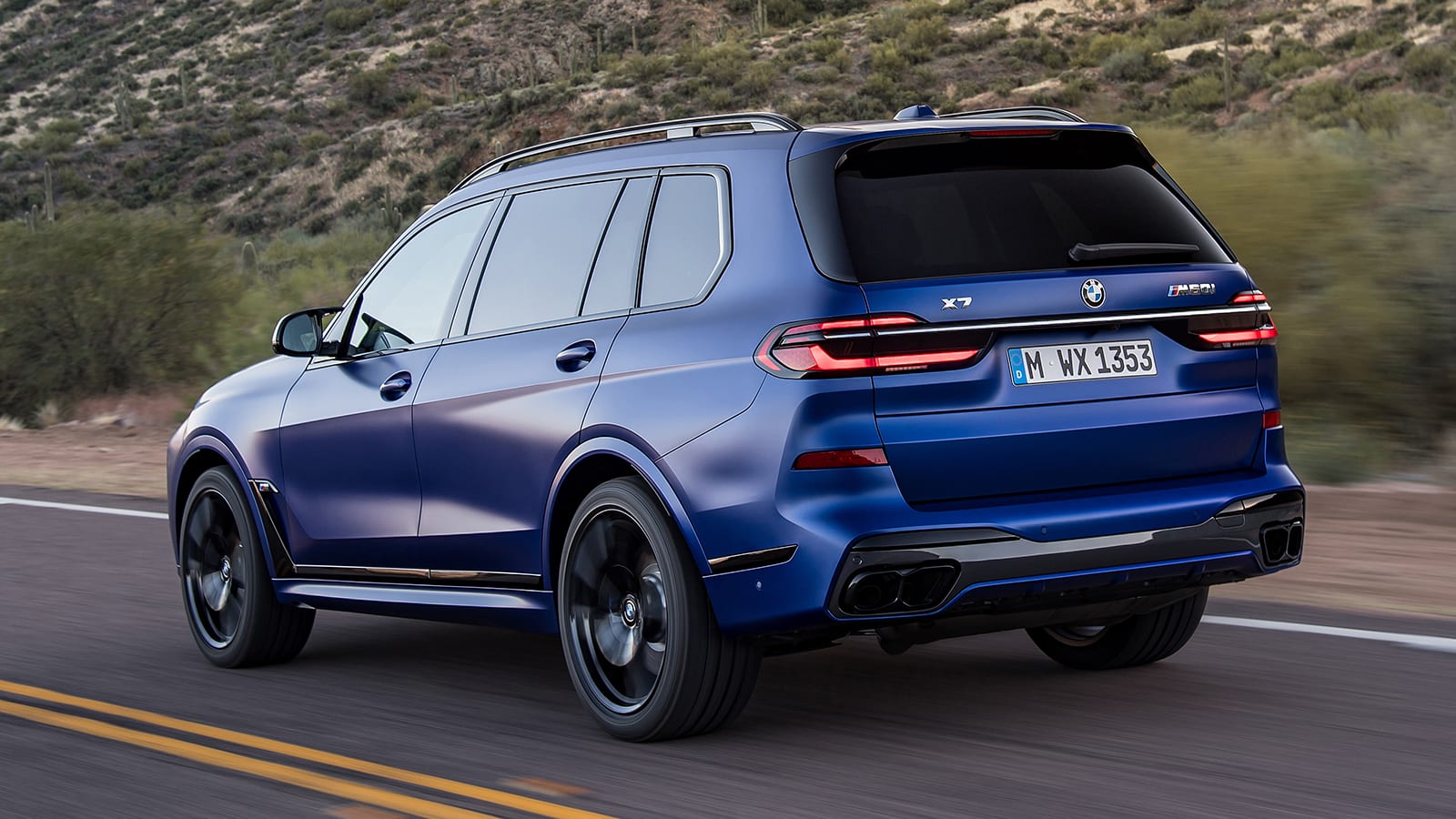 Besides powertrain upgrades, the X7’s air suspension and steering have been retuned. And like before, the M60i, being the sporty variant, features stiffer mounts, springs and shocks. The M60i also gets four-wheel steering and continously adaptive suspension, which are available optionally on the xDrive40i.

Finally, there are some technology and feature upgrades for the X7. All models now come standard with pedestrian and cyclist detection for the automatic emergency braking and forward collision prevention system. They also all have heated, power memory seats as standard. Among available features are an updated Parking Assistant Professional. This function, which lets the driver record a parking maneuver to execute automatically later, now has steering assist for backing up with a trailer. The X7 also has available driver profiles and a digital key function to unlock the car with your phone. Navigation also gets an augmented reality view that can display streets and turns overlaid on a video feed.

Carvana’s dealer license suspended in Illinois, for now
15 hours ago

SwitchArcade Round-Up: Reviews Featuring ‘Dungeons of Dreadrock’, Plus the Latest Releases and Sales
15 hours ago
We use cookies for various purposes including analytics and personalized marketing. By continuing to use the service, you agree to our use of cookies.